In today’s world of technology, digital advertising has been the go-to medium for various industries in general and medical practices specifically. Medical spa owners, chiropractors, and doctors alike have turned to the internet to advertise their treatment services to patients who need them.

However, stem cell therapies, along with other unproven medical treatments, shouldn’t be among those services practice owners should advertise, according to Google. The huge search engine says that “untested, deceptive treatments can endanger consumers.”

As a result of the rise in fraudulent stem cell clinics and severe injuries to patients from stem cell treatments, Google has placed a ban on ads for “unproven or experimental medical techniques”. This google ads ban includes most stem cell therapy, cellular therapy, and gene therapy.

Google believes that a host of “bad actors” have been trying to take advantage of patients by “untested, deceptive treatments.”  In a post explaining the new ban, Google said that these types of treatments can lead to serious health complications.  Google stated that ads displaying these treatments have no place on their platforms.

Chronically ill patients tend to depend on the internet for health information. Clinics can market directly to patients seeking help. Google makes money through these ads. All the while, patients, desperate to treat their illness, pay clinics thousands of dollars only to end up with additional health problems. Search terms like “best alternative treatment for paralysis” show ads for unproven and potentially dangerous stem cell therapies.

As stem cell research began to grow in popularity, so did the rise of fraudulent stem cell and gene therapy clinics claiming to treat certain conditions such as chronic pain, Parkinson’s, macular degeneration, ALS, multiple sclerosis, degenerative lung diseases, and other difficult-to-treat diseases. These clinics – falsely claiming that injecting stem cells into problem areas such as a joint, vein, or eye is their safest or best treatment option – would buy ads targeting U.S. consumers with their “fake cures”. As a result of such treatments, many patients suffered severe injuries. At least five women were blinded after stem cell clinics injected its product into their eyes.

Patients also suffered serious infections, benign tumors, and blindness after their treatments. Many of these patients who were seriously harmed by stem cell treatments were initially recruited as customers via Google Ads.

Since these events, federal regulators such as the Food and Drug Administration have started taking action against these “unscrupulous actors” in the field. They began writing new legislation and harshly worded letters before moving on to legal action. Google has decided to take action as well. The search giant’s new policy has added to the growing scrutiny and pressure on the medical industry to establish safe and effective treatments and leave dangerous treatments behind.

If a company posts ads that violate Google’s new Healthcare and medicines policy, Google plans to take immediate action by either taking down their ad or suspending their Google Ads account altogether. Furthermore, Andrew Ittleman, a lawyer who represents many stem cell clinics claims that Google’s broad ban on ads for stem cell and other experimental medical procedures will damage medical practices with legitimate treatment claims.

Deepak Srivastava, president of the International Society for Stem Cell Research says, “The premature marketing and commercialization of unproven stem cell products threatens public health, the confidence in biomedical research, and undermines the development of legitimate new therapies.” This means that the ban will unfairly devastate “good” companies along with “bad actors” Unfortunately, it will include the medical practices that are trying to treat patients safely and follow constantly evolving FDA regulations.

Furthermore, The new Google advertising ban on stem cell and experimental medical procedures will not be selective. The google ads ban on stem cell policy will not attempt to distinguish between clinics based on the potential risk of treating the conditions they claim to heal. For example, some conditions, such as joint issues are less risky to treat than neurological disorders. If Google did try to distinguish between the two, clinics would find loopholes within the policy to exploit.

A Look Toward The Future: More Clinical Trails

The new Google Ads ban also includes treatments that are based on scientific findings but are too early in clinical testing for public use.

Google officials recognize that there are good actors in this space who are doing important research that may lead to major discoveries of treatments that can heal a wide range of diseases. The large search engine still plans to accept ads for clinical trials cleared by the government and acknowledges that important medical discoveries often start as unproven ideas.

Because most stem cell treatments are experimental, clinic owners should only offer them to patients through monitored, well-regulated clinical trials. This is to not only help test and improve stem cell treatments, but also more general medical advances. Many clinics have shown the ability to adapt to new regulatory rules and changes like Google’s ad policy. Therefore, the new ban isn’t likely to put the industry out of business.

However, it could really hurt some clinics because of their heavy reliance on Google’s advertising platform for attracting quality leads and potential patients. Fortunately, there are many other channels practice owners can switch to such as Facebook, Bing, and Yahoo.

When it comes to marketing for your practice, there are many ethical concerns you must consider. But it doesn’t have to be complicated. At Med Spa Growth & Profitability, we can help you grow your practice and attract new patient leads. For more information, feel free to apply for a marketing strategy session today. 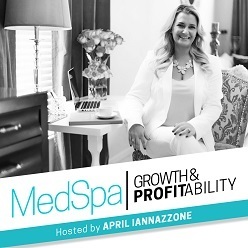