to Scale Your Med Spa in a Flash! 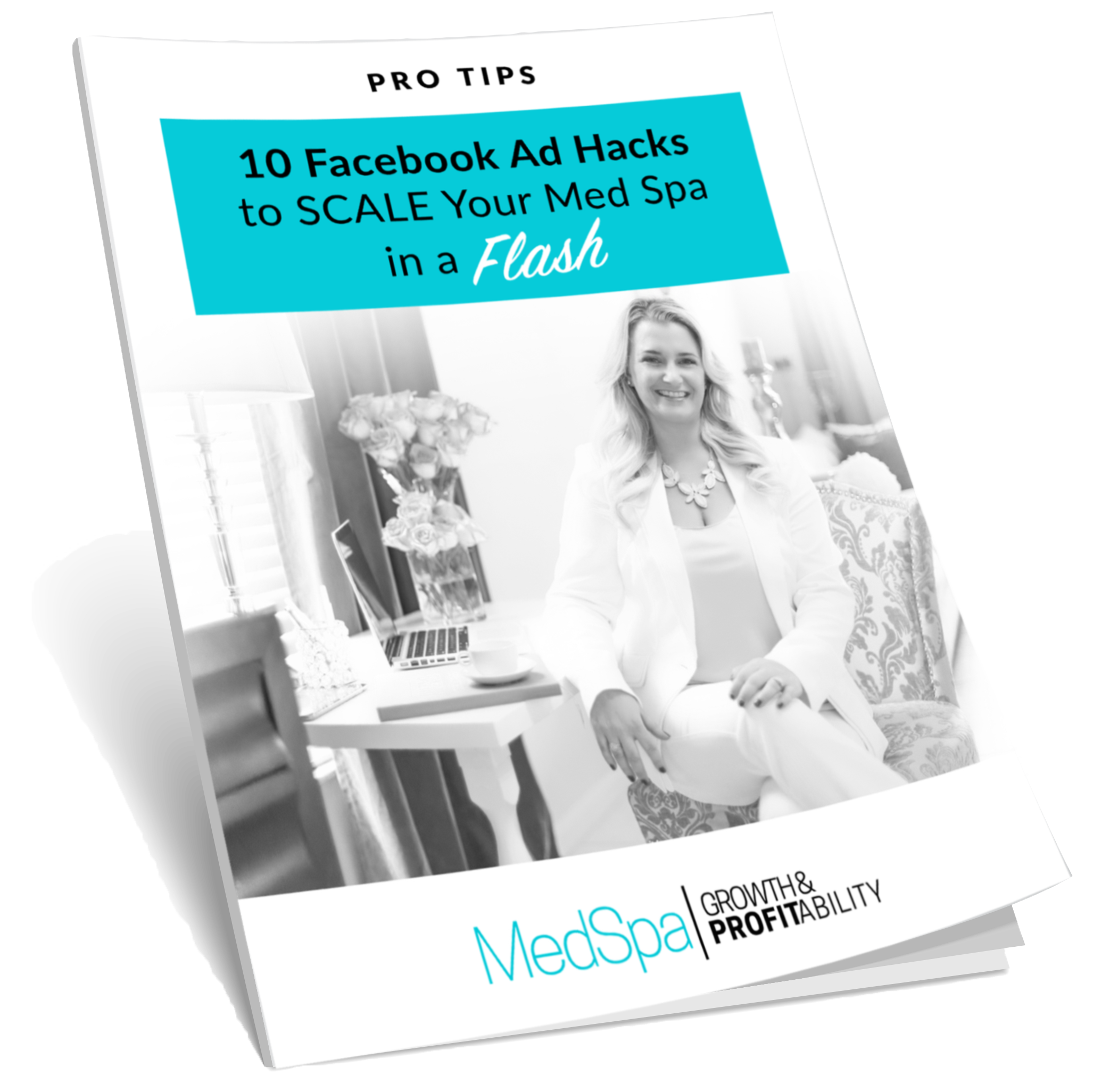 Get these pro tips on How to Scale Your Med Spa

YES! I Want to Scale My Med Spa Now!

Want Facebook Ad Hacks to Help You Triple ROI on Your Next Campaign?

Of course you do!

Here's a secret: Most med spa owners already have the right advertising tools. You're just not using them in the right ways!

Attention Medical Spa Owners: We are giving away our PRO HACKS to scale your med spa business in a flash -- and for FREE!

The truth is, to be successful, you MUST learn the right Facebook HACKS...
“A chance to learn how to optimize my Facebook ad strategy for free? Yes, please!”

We want to be the first to teach you the RIGHT way to advertise on Facebook. Want to learn...

Sound Good? Then Let’s Get Started.

YES! Teach Me How To Optimize My Facebook Strategy!

Medical spa marketers who manage Facebook advertising sometimes forget what they learned in Marketing 101. For example, they think just because you optimize your Facebook ads that they will get the desired results.

Well, they’re only half right!

Here's why: You must develop a marketing strategy before you can even think about optimizing your Facebook advertising - a strategy based on Med Spa Growth & Profitability’s deep understanding of your target market… in other words, what your customers like and what they’ll likely respond to!

Before you start optimizing your own Facebook ads -- check with Med Spa Growth & Profitability to see if you’re even targeting the right audience in the right way.

Do not rush to turn off an entire Facebook ad set when it doesn’t seem to be working. If you do, you might end up leaving precious traffic and revenue on the table.

There are important key decisions that need to be addressed when creating a Facebook advertising set like:

AND within each ad set, you need to create multiple Facebook ad creatives to test and see what works within those target audiences. And that's assuming that you already know how to effectively tailor these ads to the right audiences (which most marketers do NOT do properly!).

Before you start optimizing your own Facebook advertising strategies -- check with Med Spa Growth & Profitability to have us look at your ad breakdown data to find out what’s NOT working for you right now.

Do you know when you should start optimizing your Facebook ads? More specifically, do you know which metrics you should be examining before you optimize? We sure do!

For example, we look at the most important metrics at the end of your conversion funnel. For example, if you’re running Facebook ads for product sales, we’ll look at the total number of sales AND costs per sale as well.

Secondly, if you’re running Facebook advertising for post engagement we will examine the costs per engagement from the past, too.

AND third, if you’re running ads for Facebook advertising strategies with email signups, you can bet we'll look at the total number of registrations and costs per those registrations.

We start at the end of the conversion funnel, instead of looking at click-through rates and reach. This approach lets us make changes to your advertising that will more significantly impact your end results. Therefore, it prevents you from abandoning those effective ads.

Before you start optimizing your own Facebook advertising strategies -- check with Med Spa Growth & Profitability to have us modify your ads based on the most important metrics at the end of your conversion funnel.

We Watch for Suspiciously Low Cost per Conversions

We find that many marketers never even look at their Facebook ad reports. If this is you...

If you’re like most of our medical spa clients, any low cost results will put you over the moon with excitement…
But this should be a warning, especially when the numbers of conversions and clicks are so close together.

For instance, when you click those Facebook ads for an expanded view, you will probably see that the number of actual conversions was different than what you thought.

For example: What if only 1 of the 12 conversions was an actual sign up... Which was the only thing our clients were interested in gaining from those ads!

So, what has caused this confusion?

We want to make use of the Facebook ad manager by tracking just one conversion pixel in your ad.

Because if you’re tracking more than one conversion pixel, you could be duped into thinking that your conversions are cheaper than they really are -- because Facebook lumps all conversions together in the ad manager.

Bet you didn’t know that!

AND if you’re not careful you may encounter the same issue on a Facebook ad report.

Before advertising on Facebook check with us at Med Spa Growth & Profitability. We will run Facebook ads with multiple conversion pixels and look at each type of website conversion -- not just your overall number of conversions!

Why Optimize Facebook Ads at Just the Right Time?

Med spa owners sometimes panic when ads run but no actual results are provided within the first 24 hours.

Therefore, many businesses have daily ad spend budget, but then quickly turn off the ads that don’t convert too expensively.

They forget that the data they have on hand is not perfect. For example, most stats they use to make advertising decisions are incomplete and insignificant because the ads haven't reached a large enough audience yet.

But don’t worry! You won’t need a statistics degree to follow what we are saying here.

We at Med Spa Growth & Profitability have plenty of advertising resources to help you calculate the ideal minimum reach before we start optimizing your ads.

AND if we target by age or gender, we usually wait for Facebook ads to reach about 1,500 people before taking any results seriously. As a rule of thumb, we will consider changes only after we’ve waited. Otherwise you are just leaving money on the table!

Before attempting your own Facebook marketing strategies -- check with Med Spa Growth & Profitability to have us confirm your Facebook ad has reached at least your minimum amount of people!

Why We Look Beyond Conversion Rates

When advertising on Facebook, many medical spa owners hope to improve their conversion rates when they optimize their ads... but they’re leaving out one important aspect: cost per mille (CPM). CPM means cost per 1,000 impressions. It gives you an idea of how much competition is out there to reach the people we are targeting on Facebook.

Most importantly, this tells us how much your ads will cost.


We consider the CPM for each target audience and then decide whether you could improve your cost per conversion to maximize your ad spend on an audience with a lower CPM.

Unfortunately there's no exact science to back up the claims many so-called Facebook experts make about how often you should show the same ad to the same users...

Part of the problem is that reach doesn't mean users actually see your ad on Facebook. It just means that your Facebook ad appeared while they were using the website!

Psychology experts say that someone must see something at least 3 times before they'll remember it. Therefore, if someone notices your ad every time it appears on Facebook -- you should still show your Facebook ads at least 3 times in a row.

But then, there is also that concern about burnout...

Will people turn off your ad (or label the ad as spam) after seeing it one too many times?

We try to estimate how often someone will notice your ad when it's shown to them on Facebook. This allows us to make informed decisions based on the appearance of your ads. For instance, how likely is it that your ads will grab somebody's attention?

Perhaps our best advertising guidelines can be found in our success stories!

We aim to show each Facebook ad a minimum of 3 and maximum of 10 times in the news feed. However, the minimum could jump to 10 and maximum to 40 for ads that are shown in the sidebar.

Before attempting Facebook advertising strategies on your own -- check with us at Med Spa Growth & Profitability. If you’re not familiar with ad frequencies or have no prior data from your ad campaigns, let us go over your Facebook ad frequency before your start making any changes.

Facebook’s refined campaign structure helps our med spa page managers better administer ad campaigns by making it easier for us to track what we have changed.

We Get to Decide:

AND when we change your target audience we’ll modify your ads by customizing the images and copy for different tastes!

By merely re-allocating your ad budget spend, we should not be affecting things like the cost per conversion rate of each ad.

Therefore, we will not change a thing when running ads at specific times. We let Facebook show the same ads to your target audience so we can see if the total number of conversion and cost per conversions improve with the refined ad schedule.

When learning how to optimize your Facebook strategy -- contact Med Spa Growth & Profitability to get to know the Facebook campaign structure and to understand how best to systematically optimize your ads.

We hope at least a few of our advertising tips will be useful the next time you attempt to manage your own Facebook advertising strategy. Obviously it’s much easier if you can stick to what you’re good at and hire a professional digital marketing agency to do the rest for you! It’s very complicated... So if you're looking for a company that specializes in advertising on Facebook and is #1 within the medical spa industry -- that’s Med Spa Growth & Profitability!

If this was a bit overwhelming, not to worry! All of the above issues we’ve addressed today are very common challenges most medical spa owners face.

We’d love to hear about scenarios you’ve encountered while trying to improve your Facebook marketing strategy. We’re always here if you need any advice for overcoming your hurdles.

"What’s that? Optimize my Facebook advertising strategy for free?"

YES! Teach Me How To Optimize My Facebook Strategy!

Facebook is complicated! If you haven’t quite "cracked the code" yet…Don’t be afraid to get some free Facebook Hacks going for your medical spa business today!